"Those are the rules." - Koharu Fujiwara to Miku Okazaki and Shinji Yabe in Sempai Steak

Koharu Fujiwara is the President of the student council, and Miku Okazaki's first and main love rival. Serious at times and shy at others, she's Okazaki's complete opposite.

She has a short height and stature compared to most of the other characters. Koharu has short black hair with two long side bangs and a beauty mark under her left eye. She wears a standard school uniform with no modifications, excluding the bow seen on many female students. She also has glasses, although she doesn't wear them often. Her casual clothes are very modest, usually consisting of long-sleeved jackets.

As the vice president and later president of the student council, Koharu is a serious student and is strict about enforcing the school's rules, which grants her favor with the teachers. In her first appearance, she is very blunt and has a no-nonsense attitude, calling Miku "impudent" regarding the way she talks to her upperclassmen in their first encounter. Outside of school and after befriending Shinji Yabe (aka Yabechhi) and Miku, Koharu becomes a sweet and kind girl, claiming that she isn't being "strict with the club because she wants to". She harbors little negative feelings towards Miku and Nagisa Shirahama, despite them being her "love rivals", and always accepts Miku's various invitations to vacations with Yabecchi.  Koharu is also a very awkward girl and gets easily embarrassed, especially in situations regarding Yabecchi. She becomes bashful when Yabecchi pats her head and starts tearing up when she tripped and accidentally showed him her panties. However, she is very determined for Yabecchi to notice her. She frequently comes by his cooking club to ask for help making recipes, and she makes many foods for him to eat during school.

Family: Koharu has an unnamed mother and father, as well as two unnamed younger brothers, aged 5 and 7. She cares very deeply for her mother, always talking respectfully to her mother, and takes care of her brothers when her mother is too tired to. She also loves looking after her brothers and frequently asks Yabecchi about recipes that she could make for them.

Shinji Yabe: Yabe is a teacher of Koharu, as well as her crush. Koharu realizes her crush on Yabecchi after he encourages her to be more open about her feelings. Koharu loves how much kind Yabecchi is, how he's always there for her, and how he "laughs like a little kid". 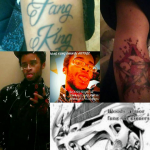